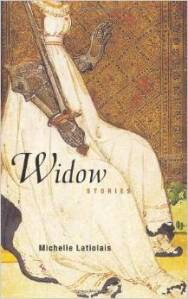 A few months back, I professed my writerly adoration for Michelle Latiolais, author of A Proper Knowledge and the short story collection Widow, two books I promptly devoured after my introduction to their author. I enjoyed reading her so much that I went out on a limb and reached out to her for Girl on Girl, an occasional interview series of mine on PDXX Collective. In this series, I interview influential female writers who address the topic of sexuality in thoughtful and meaningful ways–they’re not writing mass market bodice rippers, no S&M for bored housewives.

I’m often quite surprised when critically acclaimed authors, busy professors, and just plain amazing writers who are probably far too busy to talk to me about self-censorship and whether men get away with more in writing about sex take the time to talk to me. Michelle Latiolais encompasses all of the aforementioned titles. Our interview was so amazing, I had to share it here. One of the greatest things about being a writer is meeting other writers. It is something akin to the young kid who collects baseball cards and gets to meet her favorite player after a game and have them sign a ball. Reading Michelle’s books and then hearing her thoughts on them, that’s worth far more than an autograph. I am unabashedly a fan girl of many writers, so it was an honor to have a discourse with one of my current idols.

One of the central goals of the PDXX Collective, and a personal goal of mine, is for women writers to build each other up through a community that supports each other’s work. It always saddens me when I read the comments sections of feminist blogs and find women fighting with each other over subjects like “is this person a feminist?” It seems counter-productive to tear each other down. That’s why I appreciate it so much when established writers like Michelle Latiolais are willing to lend their support to writers like me. I prefer to end my interviews by asking what female writers my interviewee looks up to. Michelle’s interview was so amazing, but unfortunately for space constraints, I had to trim it, including that question. I’ll end today’s post with her answer to that question so that all the writers out there who read this blog can ask themselves the same thing. I think it’s important to have people in your field to look up to, and I consider myself very lucky that I’ve been able to interview a few of mine.

From Michelle’s response to the question asking what females authors she looks up to:
“Henry James.  Oh, he’s not a girl?  Hmm.  Elizabeth Tallent, always Elizabeth, Jayne Anne Phillips’ collection Black Tickets is still stupendous, and Joy Williams, her fantastic stories, and Carol Bly’s stories, and Alice Munro and Toni Morrison and Vivian Gornick and Christine Schutt and Angela Carter and Sharon Olds and Joan Didion and Barbara Guest and Pat Barker and Muriel Spark and Marguerite Duras and Mercè Rodoreda and I think I’m probably getting obnoxious, there are so many, and Marianne Moore and Gertrude Stein and Rikki Ducornet and Susan Sontag’s essays and Annie Proulx and Yiyun Li and Sandra Cisneros and Alyson Hagy and Deirdre McNamer and Jaimy Gordon and Jo Ann Beard and Carol Anshaw and Tessa Hadley and Joanna Scott and Varley O’Connor and Kathryn Davis and Melissa Pritchard and I’ve admired Allegra Goodman . . . and I could go on . . . .  Such bounty . . . and the minute I send this, I’ll think of several others, and there are others, but some of them, famous ones don’t necessarily move the furniture around for me, and well, I want when the sofa is pushed across the floor closer to the window that there be a gouge in the hardwood of my heart.”