“Art is not a form of propaganda; it is a form of truth.” –John F. Kennedy 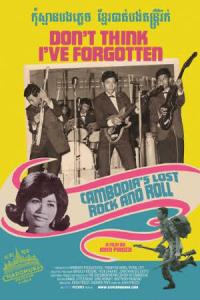 On Saturday night I watched the documentary Don’t Think I’ve Forgotten: Cambodia’s Lost Rock & Roll. It takes a look at a specific loss felt by the country of Cambodia during the genocide of some 2,000,000 citizens under the control of the Khmer Rouge from 1975-1979: that of Cambodia’s once flourishing music scene. Dr. LinDa Saphan, a Cambodian artist and Associate Producer and researcher of the film, introduced the screening. She closed her introduction by saying that this film, which aims to recognize what Cambodia lost and introduce this important aspect of Cambodia’s cultural history to others, is a “big middle finger to the Khmer Rouge,” the murderous regime that aimed to systematically wipe out Cambodia’s artists and their contributions.

The documentary opened with a history and celebration of Cambodia’s Western-influenced rock and roll and its famous musicians from the 1950s-1970s, including the industrious Sin Sisamuth (Cambodia’s Frank Sinatra) and Ros Sereysothea. Both artists disappeared during the genocide with much of their music destroyed. You can read more about how the Khmer Rouge’s genocide nearly wiped out the rock music scene in this VICE article, complete with some of the great tracks embedded in the article. Go see the movie as well for interviews with some of the surviving musicians and to listen and appreciate the soundtrack from Cambodia’s golden age of music.

With artists and their oppression at the forefront of my mind today, I read this week’s Brain Pickings, which features an article highlighting President JFK’s eulogy for inaugural Poet Laureate Robert Frost. There are many nuggets of truth in another eloquent speech from one of America’s foremost orators, much of it stemming from JFK’s admiration for artists and enduring support of the arts. As he reflects on Robert Frost, man and artist, he considers the role of the artist in society: “Strength takes many forms, and the most obvious forms are not always the most significant. The men who create power make an indispensable contribution to the nation’s greatness, but the men who question power make a contribution just as indispensable.” JFK saw the artist as the person with the unique role of commentator on and contributor to society. The artist is the cultural anthropologist of society, tracing its history and fighting against its injustices. One of the interviewees in Don’t Think I’ve Forgotten said it best (I’m paraphrasing here): “If you want to wipe out the past society, you must kill all the artists.”

Many of Cambodia’s most popular musicians were lost along with so many other lives in the “killing fields.” Those musicians who survived did so by lying about their real professions. To be a musician in Cambodia at that time was to be a questioner of power. To survive was to be silenced. I am thankful now to have seen this film and hope that many others do too. For those lost, not just the artists but the many millions of others, I want to honor their lives. And for the artists, I want to keep their work alive. According to some, when Sin Sisamuth was executed, his one request was to be allowed to sing before he died. In JFK’s words, “When power corrupts, poetry cleanses.”