So that whole NaNoWriMo thing, yeah that didn’t happen for me this month. It felt strange not participating in it for the first time in four years. But between work and needing to turn around edits on my forthcoming story collection, life sort of got in the way of word counts. But even a NaNoWriMo loser can start fresh come December First, and that’s my plan.

I’m having a hard time getting started on my new manuscript–I’ve got an outline and around 3,000 words written, but right now it feels like there is a big old wall standing between my story and me. But, I have found it very easy to find all the influences needed for it, starting with a plot skeleton that comes from (in my humble opinion) the greatest vampire film of all time: The Lost Boys.

I have long pondered the idea of writing a cinematic re-imagining of the classic 1987 vamp movie starring not one but two Coreys (Haim and Feldman, natch). When I finally accepted my destiny as not a screenwriter, I realized I may as well write the best fan fiction I can. As per feminist usual, I’m subverting much of the story, starting with an all-girls vamp gang.

In order to get in the mindset of a riot grrrl vampire gang, I knew I needed to go back to the source, which is why the below list (not comprehensive, but a good start for now) is everything influencing by new project:

Listening to: Sleater-Kinney and Le Tigre. I know there is a wealth of musical options from the early nineties Riot Grrrl movement, but Sleater-Kinney is hands down my favorite. I started listening to Le Tigre while writing this manuscript and often find myself taking dance breaks. 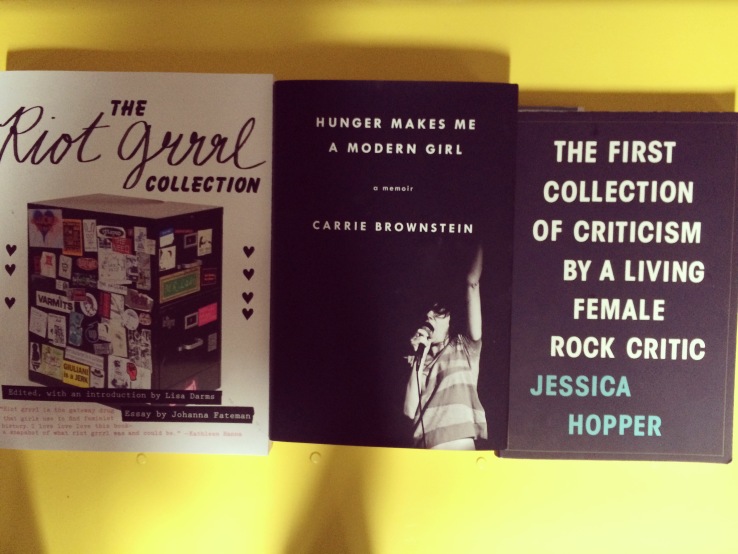 I love vampire stories and all the symbolism they hold about sexuality, alienation and loneliness, and our fear of dying. I’m also excited to write something fun and a bit campy. Lately, I’ve been knee deep in edits of realist short fiction. I need a vamp or two to spice up my life.