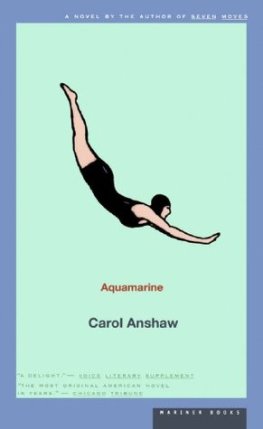 I love the serendipity of having the right book come to you at the right time. Thankfully, as someone who works in publishing and surrounds herself with other book people, it’s usually not hard to coax the fates into providing said book. This time around, my friend, fellow writer, and surrogate brother Joaquin dropped Carol Anshaw’s Aquamarine into my life, and everything about it–structure, plot, characters–has rattled me to my core.

Joaquin is a former student of Ms. Anshaw’s, and I feel lucky to benefit from this connection. Her book was published in the early 90s and is the kind of small and quiet literary gem that is all too often lost in the ocean of book options readers have at their disposal (some 300,000 books are now published each year, which makes finding the “right” one a miraculous feat). The novel follows one woman, Jesse Austin, through three possible lives. After a quick opening set at the 1968 Olympics, where Jesse takes silver in the 100 meter swim and loses to her first love, Australian beauty Marty Finch, the plot forks into Jesse’s three lives.

In the first iteration of possible lives, Jesse has returned to her hometown, New Jerusalem, Missouri, and settled into seemingly domestic bliss with a husband who loves her and a baby on the way. This bliss (as is often the case) is partially surface-level as she entangles herself in an affair with a younger man who wants her to run away with him.

In her second life, Jesse has wound up an English professor in New York with a live-in actress girlfriend. She and the girlfriend visit New Jerusalem for the first time as a couple. On the drive there, she muses about her relationship with her hometown: “Feeling far above and beyond New Jerusalem, and at the same time romanticizing it like crazy. Longing to be instantly away, and alternately to stay forever…” I can’t remember a passage from a book that so precisely describes how I feel about the hometown I left ten years ago.

There is a line near the end of the book about Jesse’s son in her third possible life, in which she is a single mother raising two kids and managing a swimming facility in Florida: “Sorting through all the ways he can be until he gets to who he’s going to become.” I think this line best encapsulates Aquamarine. It’s a story about the many roads our life can take (think the Gwyneth Paltrow movie Sliding Doors but better and with beautiful water metaphors).

The book’s construction is full of smartly overlapping characters and moments that pop up in different forms in the various lives: the soap opera she watches in her first life, the most domestic of the three, has a character played by the woman who is her girlfriend in the second life scenario. The one constant that remains beyond her family and her history as a swimmer, is her memory of Marty Finch and how the moment she lost the gold metal to her was the catalyst for all her lives.

Lately, I’ve felt very much at a fork in my life, and I see it going three ways: returning home to the security, comfort, and community of Washington State; staying in New York city to prove (to whom, I’m not sure) that I’m tough enough to make it here; chase a dream to California and (maybe, finally) lay down some roots. From where I stand now, I’m not sure which is the right path or whether a fourth, unforeseen road is still being paved for me. I’m not sure I know what moment in my life was the catalyst for getting me to where I am now, or if it hasn’t happened yet.

If I can take anything away from reading Aquamarine (besides being utterly entertained by its wit and enchanted by the sparkling language), it’s that (if we’re lucky), we have an infinite number of possible lives–of jobs and lovers and places to call home–we could live. We’ll never know which is the right one and we may forever be haunted by the hypothetical (what would have happened had I never left Seattle? What if I had gotten my MFA? what if I stayed with my high school sweetheart?). I don’t believe in fate or predestination or anything spiritual–I’m of the Camus school of everything is meaningless chaos. But that doesn’t mean I don’t have room for optimism in my life. Camus argued it was our moral obligation to be happy. Whichever life I wind up with, I want to make sure happiness is woven into it.